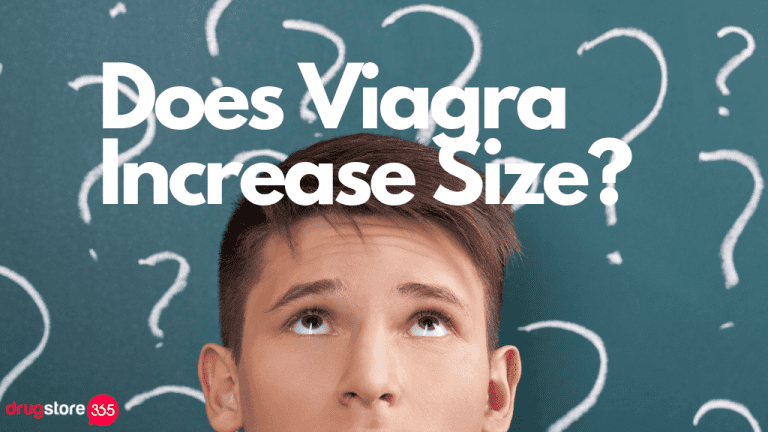 Does Viagra increase size? Many people with erectile dysfunction (ED) have been asking the same question—and surely, countless others are interested as well. Worry not as that question and how the drug can improve sexual function will be tackled here.

Yes, you’ll finally find out what the little blue pill really can and can’t do. Let’s start with how Viagra (sildenafil) works in the body.

Mechanism of an Erection

Interestingly, when sildenafil was first synthesized in 1989 by Pfizer, they were looking into heart conditions. However, their trials revealed it had little effect on cardiovascular health.

In the course of the trials, the participants reported having improved penile function. After a thorough investigation, researchers discovered that the drug could inhibit the action of phosphodiesterase type 5 (PDE5).

PDE5 is an enzyme that inhibits the action of cyclic guanosine monophosphate (cGMP) (1). Whenever there’s an abundance of cGMP, blood flow towards the penis remains optimal. This blood flow is what allows an erection to happen.

Pfizer obtained a patent for the drug in 1996, and the FDA approved its use for ED in March 1998.

The Pill and Lasting in Bed

The ED drug has a half-life of around 4 hours, meaning it should stay in the bloodstream (and capable of supporting erection) for that long. It doesn’t mean that your penis will remain erect for hours, though. If that happens, you might suffer from tissue damage.

When Viagra is needed for an expected sexual activity, the recommended time allowance for dosing is an hour before sex. The medication should not be taken more than once daily, and the maximum safe dosage for one day is 100 mg.

The drug is also available in 25 and 50 mg doses; for men with hepatic and renal problems, the lower dose is recommended (2).

In some patients, Viagra works even in lower doses. Thus, you might not need to take 100 mg or even 50 mg to achieve erection, penetration, and orgasm. Be sure to talk to your doctor about the proper dosage.

Does Age or Ethnicity Matter?

In taking Viagra, ethnicity and age don’t really matter. A study showed that the drug is well-tolerated and effective regardless of such factors. However, it was also noted that the drug’s effects might vary from person to person (3).

In another study conducted among Mexicans, researchers found that the drug is well-tolerated among this group of people. There are also findings that highlight Viagra’s capacity to help Chinese ED patients, who were able to achieve grades 3 to 4 hardness during erection.

Note that patients with grade 4 hardness enjoy significant improvements in their sexual function compared to those who can only achieve grade 3 hardness. This study also found that a marked improvement in hardness can be achieved even by people who are 50 years or older (4).

What Are Viagra’s Side Effects?

Take note that most of Viagra’s side effects are due to the vasodilatory effect of the drug. The two most common side effects are headache and flushing. However, these are easily treated and short-lived.

Other side effects include heartburn and nasal congestion. There are reports of patients suffering from myocardial infarction after taking Viagra as directed, but this is more related to the intensity of sexual intercourse than to the medicine itself (5).

By the way, the presence of side effects isn’t a downside limited to Viagra, as all ED medications can trigger adverse reactions.

Viagra as a Long-Term Solution

Viagra can be considered a long-term solution for ED, as suggested by a 4-year study involving 979 male participants (6).

In the area of Viagra’s effectiveness, more than 94% of the participants reported satisfaction with their erection. Data from the study also suggest that almost all participants expressed improved ability to perform sexual activity.

The same study also measured the tolerability of the drug. Throughout the years of testing, only 3.8% of the participants experienced one or more adverse reactions. This led them to temporarily or permanently stop their participation in the study.

There were cases of 4 cardiovascular events that were treatment-related. Out of those 4, only one led to permanent discontinuation.

Out of the 149 cases of serious adverse events in the course of the 4-year study, including those with myocardial infarctions, none were related to the treatments.

But Does Viagra Increase Size?

Seriously, the answer is no. All clinical studies that were done for Viagra never considered this kind of effect, and it was never seen or observed to begin with. All that the ED drug can do is increase the blood flow to the penis by binding the PDE5 enzyme.

Your penis will have the same size as it was before you even had ED, but due to the effects of Viagra, it should finally have the necessary hardness to give you the capacity to engage in sexual intercourse.

Well, if it has been mostly limp for a while, getting your penis hard might be the best thing you’ve ever seen in your life. It might trick you into thinking that there have been improvements in length and girth. But the truth is, it has the same size as it has always had.

Viagra is not a penis-enlarging product like the ProExtender. There are products such as penis extenders marketed for that very purpose, but be careful of buying and using them. Any damage to your penile tissue caused may lead to permanent impotence.

Bigger With Sildenafil: Not True

Viagra is an effective, safe, and well-tolerated treatment for ED, and that’s why it’s often recommended for long-term use. However, don’t be too enthusiastic about taking it, thinking that it can increase size as well.

The medication is specifically for blocking the PDE5 enzyme’s effects, allowing for blood to be optimally transported into the penis. No matter how much blood gets into the penile region though, improvements in length and girth won’t be achieved.

If you have questions about anything not discussed here, simply post them below.