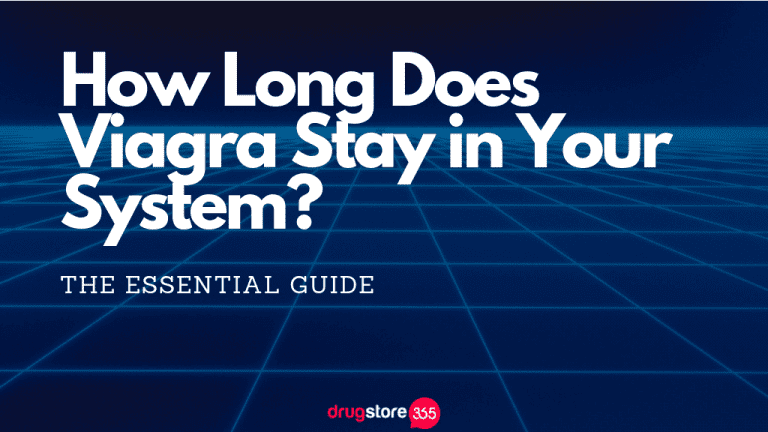 How long does Viagra stay in your system? Are there actually ways of prolonging its efficacy? Also, is there any risk involved when taking, even when following the prescription?

Given how common erectile dysfunction (ED) has become, it’s essential that these questions are answered in a detailed yet easy-to-understand way.

Worry not, since we’re going to tackle the most common queries regarding the little blue pill—and we’ll also talk about a few essential things you’ll need to know before taking it the first time.

Sildenafil is the active ingredient in Viagra. It’s a chemical compound developed and studied by Pfizer way back in 1989, albeit as a treatment for angina pectoris and hypertension (1).

The first clinical trials showed that the compound had little effect on angina. However, in the same trials, it was discovered that the drug could improve penile erection.

In March 1998, the FDA approved the use of Viagra for treating ED. The drug became the first oral treatment for the male health dilemma in the United States.

The highest annual sales recorded for the medicine was in 2008 ($1.934 billion). It became available as a generic medication in 2017. It can be purchased over the counter in the UK.

Sildenafil inhibits the action of phosphodiesterase type 5 (PDE5), an enzyme that causes the degradation of cyclic guanosine monophosphate (cGMP) in the penis’ corpus cavernosum (2).

Through this action, sildenafil can relax the smooth muscles, which in turn causes dilation of the penis’ blood vessels. This increases blood flow towards the male organ, ultimately causing an erection.

How Long Does Viagra Stay in Your System?

Viagra is rapidly absorbed in the body, reaching its highest plasma concentrations within approximately an hour of administration. Its elimination half-life is 3 to 5 hours.

The median time for onset of erection is 27 minutes after administration (at a dose of 50 mg). This is sufficiently fast in most cases, making it possible to take the drug without much planning.

The longest time recorded for the onset of erection in the same study is 70 minutes, while the shortest is 12 minutes. In a study, about 70% of those who used Viagra achieved an erection within 30 minutes of intake (3).

While the drug remains active throughout that duration, you still need to be sexually stimulated to achieve and maintain an erection. Also, the drug’s effectiveness gradually drops as time passes.

Don’t expect to enjoy the same extent of effects if you’re yet to have sex and it’s already been four hours since you’ve taken the little blue pill. In rare cases, however, it can stay active for up to 12 hours (4).

Is It Possible to Make It Last Longer?

Several factors affect how long Viagra stays in your system. Your diet, for example, may partly determine the pace at which the drug provides its benefits.

If you take the ED medication on an empty stomach, you’ll get to enjoy its effects in the shortest possible time. The downside to this, though, is that it’ll also lose its effectiveness faster.

On the other hand, if you choose to have a meal before taking Viagra, it will require a longer time to manifest its effects. But, as you would expect at this point, it will lose its efficacy at a slower pace as well.

It’s possible to lengthen further the time that the drug stays in your bloodstream—just go for fatty food. High-fat meals are more taxing to digest, especially when compared to their carb-loaded counterparts.

Let’s Talk about the Issue of Alcohol

Aside from the things you eat, your choice of beverage can affect the ED medication’s actual efficacy. Alcohol, despite its perceived importance in setting the mood and lowering inhibition, can severely limit Viagra’s effect.

At its core, alcohol (e.g., beer, wine, spirits, etc.) is a depressant (5). When consumed in excessive amounts, it lowers libido and dampens the mood. In other words, it makes it harder to achieve an erection.

It basically keeps Viagra from doing its job, meaning it won’t really matter how long it stays in your body. So, the question now is this—what counts as an excessive amount?

If you wish to drink despite facing the need to take an ED medication, keep your intake within two units in a day. A 330 ml bottle of beer, for example, is already equivalent to 1.7 units of alcohol.

A can of beer typically translates to 2 units, while a pint of strong lager or cider amounts to 3 units. A shot of gin, vodka, or tequila is generally set at 1 to 1.4 units.

Age and the Medication’s Efficacy

Metabolism doesn’t stay at the same rate throughout a person’s life. Older people, in general, have slower metabolism compared to their younger counterparts.

Aside from metabolism itself, the organs no longer work optimally. The liver, which processes the ED drug’s active ingredient, also functions at a slower pace (6).

With this in mind, it’s easy to understand why older individuals tend to enjoy the benefits of Viagra relatively longer. It remains in the bloodstream at higher concentrations since it doesn’t get efficiently metabolized.

The downside to this, though, is that the drug won’t work as quickly as it should. Older individuals, specifically those over 65, may need to wait more than an hour before feeling Viagra’s effects.

How well your body works has an impact on how long the medication remains in your bloodstream. For example, if you currently have liver or kidney problems, Viagra can only be processed slowly.

While this may seem advantageous, there’s the risk of it accumulating in your body and reaching dangerous levels. An excessively high concentration of sildenafil also makes it more likely for you to experience side effects.

Taking Viagra and azithromycin (an antibiotic) is likewise not recommended, or at the very least requires changes in dosing. The two, when combined, may increase your chances of suffering from adverse reactions.

For ritonavir users, it’s recommended that they don’t use more than 25 mg of Viagra in 48 hours. For anyone else who relies on these CYP3A4 inhibitors, there’s often a limit of 25 mg per day.

It’s interesting, however, that some studies refute the existence of such risks. These are still somewhat limited, even when it comes to the number of patients involved, so it’s best to err on the side of caution (8).

Side Effect Profile of the ED Medication

What exactly are these side effects? Are they really enough to be a cause of concern? While it’s essential to know how long the drug stays in your system, it’s also imperative that you learn about the risks you might face.

Well, the initial studies on Viagra show a low incidence of adverse reactions and high tolerability among patients. In a recent study, 256 patients were asked about the occurrence of visual changes, nasal congestion, dyspepsia, flushing, and headache.

The results revealed that among users of Viagra, about 30% experience flushing and about 25% experience headaches. Roughly 10% suffered from heartburn, and 19% developed nasal congestion (9).

It’s also encouraging to know that only a third of the participants experienced more than one side effect. Experiencing severe side effects is highly unlikely. And the ones listed so far are generally mild and short-lived.

From the list of side effects published by Pfizer, however, the most common adverse reactions include myalgia, dyspepsia, back pain, nausea, rash, and abnormal vision.

The pharmaceutical company advises patients to stop taking the drug if they experience loss of vision in one or both eyes.

Talk to your doctor before taking Viagra as there risks with the use of the drug. If you eventually get a prescription for the ED medication, you’ll most likely be given the 50 mg dose first.

The drug must be taken an hour before sex and should not be used more than once per day. If the 50 mg dose fails to effectively support your erection, your doctor might recommend a higher dosage (100 mg).

More on Contraindications and Warnings

For the sake of safety and awareness, keep these contraindications and warnings in mind as you consider the different treatments for ED:

If you have a preexisting cardiovascular condition, it’s essential to talk with your doctor before taking any ED drug.

For people with such a health concern, the advice is to avoid taking Viagra—especially if they’re prohibited from engaging in sexual activity (10).

To accurately assess patient safety, doctors must perform a thorough medical examination. This includes pinpointing the root cause of the erection issue.

This is another case in which doctor supervision is crucial. In fact, anyone who has had these problems in the past six months is advised to stay away from sildenafil.

What makes things even riskier among those with hypertension or hypotension is that the medications they’re taking may create drastic shifts in blood pressure when taken with the ED drug.

Viagra can also increase the efficacy of alpha-blockers and nitrates. Anyone who’s currently on alpha-blockers but needs the little blue pill is likely to be given a starting dose of 25 mg.

There have been a few reported cases of prolonged erection. If your erection continues for more than 4 hours, call your doctor right away.

In cases of priapism (erections that last beyond 6 hours), it’s possible for penile tissue damage to occur. Treatment should be done immediately.

Hearing loss is also a side effect of Viagra (12). It may be accompanied by dizziness and tinnitus. In such cases, prompt medical intervention is needed. Stop taking medicine if that happens to you.

Cases of Viagra Abuse and Overdose

Despite Viagra being taken as needed, there are still cases of abuse and overdose involving it.

The first case we’re going to discuss is about a man who used the drug at progressive doses over ten years. And surprisingly, he started with the 100 mg tablet.

The second case involves the death of a man, but the cause of death was not explicitly tied to his use of Viagra (14).

Nonetheless, investigators found that, at the time of his death, his blood plasma concentration for sildenafil was four times greater than the allowable therapeutic levels.

Aside from the possibility that he died from the abuse of the drug, he was also suffering from diabetes mellitus, hypertension, chronic alcoholism, and anxiety-depressive disorder.

One of these other health concerns might have played a more significant role in his eventual death.

Sildenafil’s Duration in Your Body

Viagra stays in your system for roughly 3 to 5 hours, although its effects can be felt within an hour. Its duration can vary depending on your dietary choices, your alcohol intake, and your overall health status.

If you wish to lengthen the time that the drug stays active, you should aim to become healthier in all possible aspects. Remember that ED is caused by several factors, including those that are psychological.

How long does Viagra stay in your system? Well, despite knowing the answer to that, you probably have other questions in mind.

Tell us about them through the comments box below—or tell us your story so others can have a better understanding of how the drug works.