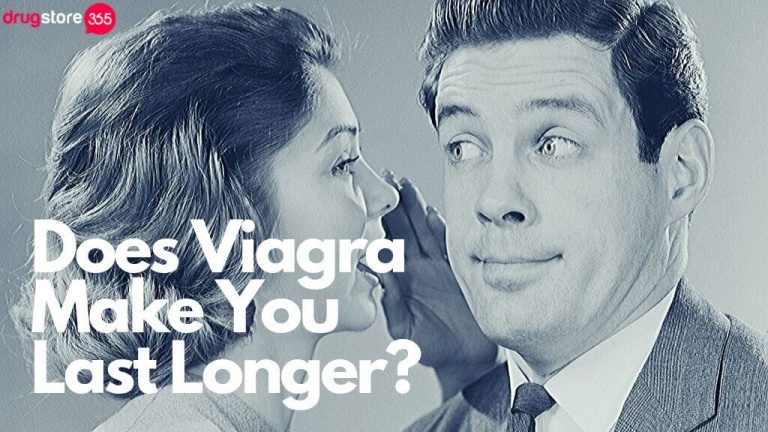 You’ve probably heard about the blue pill that has supposedly managed to change countless lives globally and is believed to be an effective tool against all sorts of sexual woes.

But, can Viagra make you last longer?

You must know what this medication really is and what it can do—at least to avoid disappointment from taking it for the wrong reasons.

So, to begin learning about Viagra, let’s start by talking about sildenafil.

Who Came Up with the Pill? How Does It Work?

In 1988, British scientists Peter Dunn and Albert Wood created sildenafil citrate as a potential treatment for angina and hypertension. These diseases are often associated with coronary heart disease.

In 1991, the drug was granted a British patent under Nicholas Terrett, often referred to as the father of Viagra. For that patent, it was classified as a drug for heart diseases.

Pfizer’s first clinical trials in the 1990s did not show the drug’s efficacy for treating heart conditions. In those trials, however, participants reported having better erections upon taking the medication.

Succeeding studies confirmed that it was sildenafil that caused such improvement. And finally, in 1998, the FDA approved sildenafil as a treatment for ED.

Sildenafil is the generic name for Viagra. Its primary function is to inhibit the actions of phosphodiesterase type 5 (PDE5), an enzyme that promotes the breakdown of cyclic guanosine monophosphate (cGMP). As you’ve probably guessed, cGMP is responsible for facilitating the flow of blood into the penis.

Specifically, by blocking PDE5, sildenafil causes the corpus cavernous, or the penis’ smooth muscles, to stay in a relaxed or dilated state. This, in turn, allows for blood to rush into the penile region whenever erection is expected to occur, such as when there’s sufficient sexual stimulation.

To be clear, sildenafil alone will not cause an erection. Taking medicine should be combined with sexual arousal to cause erection (1).

Why Is Viagra So Popular? What Makes It Stand Out?

Although it isn’t the only ED drug on the market, Viagra remains a popular choice.

The following are some of the reasons why it’s often the top recommendation for those having trouble getting and staying erect:

What’s the Right Dose? When’s the Best Time to Take It?

For most patients, doctors will recommend the 50 mg tab. However, both 50 mg and 100 mg doses can significantly improve the sexual experience, erection quality, treatment satisfaction, and anxiety levels (5). The time window for taking the tablet is anywhere from 30 minutes to 4 hours before sex.

Doctors don’t recommend taking Viagra more than once a day, though. You can take the drug with an empty stomach if you plan to eat before or right after taking a pill, stay away from fatty foods. Like many other medications, sildenafil works slowly in the presence of fats and oils.

Is It Possible to Take Way Too Much of the Little Blue Pill?

Studies are proving that amounts up to eight times the standard dose remain safe, only causing mild or minor side effects. Still, don’t take this as a reason to raise your dose without thinking things thoroughly. If you believe that it’s necessary to take more, talk to your doctor first.

In a report published in 2015, a 40-year old man self-administered the drug, gradually increasing the dosage from 100 mg to 1,300 mg over ten years. In the 9th to 10th year, the only adverse effect that the man had was blurring of vision (6).

In another case of overdose, the arrhythmogenic effect (tending to produce cardiac arrhythmia) of Viagra was highlighted. Here, a 56-year old male was found dead in his home. He had a history of diabetes mellitus, chronic alcoholism, ED, hypertension, and anxiety-depressive disorders.

The man’s postmortem sildenafil blood concentration was at least four times the highest therapeutic levels recommended in the past (7).

Viagra Is Safe, But What Side Effects Should You Expect?

A study involving 256 men sought to find the incidence of side effects associated with Viagra. The researchers questioned the participants about the occurrence of headache, flushing, nasal congestion, dyspepsia, and other adverse reactions (8).

They found that the little blue pill is safe and well-tolerated, although they noted that taking higher doses can still lead to increased risk of developing side effects.

Interestingly, these adverse reactions were short-lived and mild. None among the participants had to withdraw from the study due to the severity of the side effect they’re experiencing.

How Long Does Viagra Last? How Potent is One Dose?

The little blue pill should remain active anywhere from 4 to 12 hours (9). Different studies suggest different ranges, so what we can say is it varies from person to person. Indeed, there are individual factors to be considered rather than just the potency of the drug.

Keep in mind that Viagra staying active doesn’t mean you’ll get an erection that lasts for several hours straight. What it only means is that erection can be achieved and maintained within a specific duration of time. On average, expect an erection to last for up to 30 minutes.

The Big Question: Does Viagra Make You Last Longer?

Without a doubt, the little blue pill is impressive. However, as you’ve probably realized, it has a relatively straightforward mechanism of action. That translates to limitations in terms of what it can do, despite being a good thing when it comes to limiting the risk of side effects.

So, given how Viagra works, it can only help you last longer if your problem lies in maintaining an erection. Other concerns, such as premature ejaculation (PE), low libido, and fatigue can’t be solved by taking medication developed for treating ED.

How fast is Viagra in helping you get erect? According to studies, erection can be achieved in as fast as 12 minutes. For most patients, though, an erection occurs within 30 minutes after dosing (10).

To really be satisfied with your sex life, as well as to truly please your partner, you’ll have to tackle all related concerns. Let’s say you have PE as well. Knowing that the little blue pill won’t be of much help, what should you do to last longer?

Well, you can overcome PE by relying on pills and creams, or by trying specific techniques. Dapoxetine (aka Priligy) is arguably the most popular prescription drug for managing PE. Although the exact mechanism is still unclear, the pill generally works by inhibiting the serotonin transporter (11).

It keeps serotonin active and able to interact with neurotransmitters. In turn, this prevents the ejaculatory pathway from being started in the central nervous system (CNS), meaning orgasm gets avoided—at least until a certain point, or in most cases, a four-fold increase in duration.

Although it doesn’t seem impressive, a four-fold improvement matters a lot to anyone diagnosed with PE. After all, having PE means you ejaculate within 2 minutes of engaging in sexual activity. There are even those who orgasm before penetration. The healthy average is around 5 minutes.

Fighting PE: Make the Most of Desensitizing Creams

Desensitizing creams are essentially local anesthetics, meaning what they do is reduce the penis’ sensitivity. The EMLA cream, for example, was initially developed to manage the pain associated with specific medical procedures (e.g., laser surgery, wart removal).

At present, it’s also being given for PE, and the results are encouraging (12). Capable of making men last twice longer and being rather convenient to use, desensitizing creams remain a top choice. Most cosmetics don’t require a prescription as well, improving their overall appeal and accessibility.

Do these topical solutions to PE have a downside? Of course, they do. For one, they can trigger allergies, especially if you’re sensitive to amide anesthetics (e.g., lidocaine, prilocaine). Another is the fact that they can cause numbness, which could lead to brief bouts with ED.

By the way, in using desensitizing creams, you mustn’t forget to wear a condom. Not having one on and engaging in sex means your partner will also get a lot less sensitive down there, making it much harder for her to receive stimulation. Her libido will drop, eventually ruining the mood.

Solving the Problem Through the Right Techniques

Although not as simple as taking a pill or applying creams, these techniques can be just as effective in the battle against PE. If you’re yet to try solving the male health dilemma through any means, you should consider these suggestions:

Foreplay is an essential part of sex. It helps set the mood and boosts her sensitivity to pleasure. So, by spending enough time on foreplay, you become more capable of satisfying her. Lasting 5 minutes or more during intercourse won’t be that necessary if she can orgasm faster.

PE is often a psychological issue, and so, you can use your mind to keep it under control. During penetration, try thinking of other things, particularly those that aren’t stimulating at all. Some do mental math, while others create off-putting mental pictures.

This is a popular technique that has undoubtedly benefited many. The squeeze method is all about gripping the penis’ head right before you reach the point of orgasm. Maintain your grip for about 10 to 20 seconds before resuming penetration.

The stop-start method is more discreet and spontaneous since you’ll only have to pause the moment before you ejaculate. Take a long, deep breath, and once you’ve calmed down a bit, you may once again resume penetration. This provides greater control in the long run (14).

Using a thick condom works in a similar fashion to applying a desensitizing cream. Simply put, by making the penis less receptive towards stimulation (in this case through physical means), you should be able to last longer.

Again, PE has a psychological component (15). A way of dealing with worries or fears is by being open with your partner. Talk about the things that work best for both of you, and identify those that aren’t worthwhile at all. Also, by being open, you maintain a relaxed mood.

Viagra is generally safe and effective—mainly due to the fact it works straightforwardly. It keeps blood flowing into the penile region, primarily whenever there’s sexual stimulation involved.

With that said, unless you don’t last long enough due to difficulties in keeping erect, Viagra won’t solve your problems. You have to rely on other solutions that specifically target the root of the concern you’re facing.

Does Viagra make you last longer? Again, it depends, though it won’t in most cases. If you have more questions to ask, feel free to tell us by leaving a comment below.