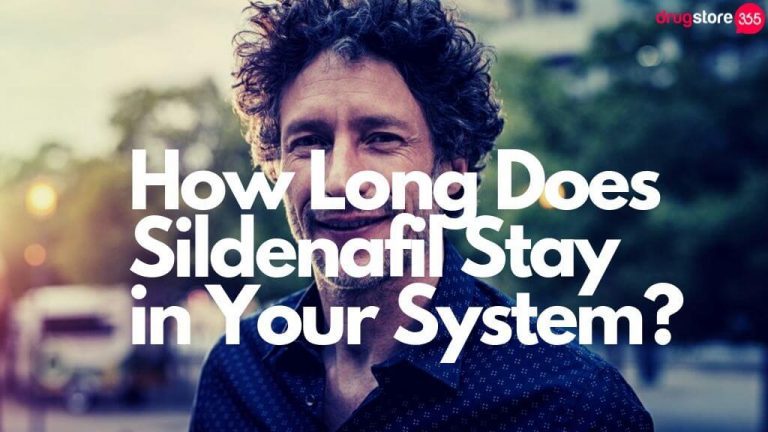 Sildenafil, more popularly known as Viagra, is an effective drug for the treatment of erectile dysfunction or ED.

The little blue pill is a big success and has helped improve countless lives. Still, many are curious to know: how long does Sildenafil stay in your system?

Understanding the science behind the drug may provide the answers to this critical question.

The Need for a Reliable Solution

ED is a condition that can cause panic in most men. It’s a major concern for those who have led very active sex lives in their younger years. ED can be a big blow to a man’s ego, especially when one has gotten used to performing on-demand.

It’s as if a part of a man has gone missing because of ED. Those who suffer from this health dilemma often experience bouts of anxiety and depression (1).

There have been many breakthroughs in the field of science. But many consider sildenafil as one of the greatest achievements of modern medicine.

Sildenafil is one of the earliest FDA-approved drugs for the treatment of ED. The drug, sold as Viagra, has given many renewed hope. It has also brought back confidence in men who have long suffered from impotence.

There have since been other medications approved by the FDA for the treatment of ED. But sildenafil remains a popular choice. The continued demand for the little blue pill is a testament to its proven efficacy.

NO causes an enzyme called guanylate cyclase to convert guanosine triphosphate into cyclic guanosine monophosphate (cGMP), and this, in turn, relaxes the smooth muscles (2).

As a result, the lacunar spaces within the corpora cavernosa widen. Blood then fills the lacunar spaces. As the tissue continues to swell, it limits blood flow out of the penis. The increasing pressure causes an erection.

The penis also returns to its flaccid state during a normal erection cycle. An enzyme in the tissue called phosphodiesterase type 5 (PDE5) breaks down cGMP.

The breakdown of cGMP then causes smooth muscle contraction. This contraction causes blood to drain from the penis, resulting in flaccidness.

Men suffering from ED produce very little NO and cGMP. PDE5 also continues to break down the small amounts of cGMP in the erectile tissues. This makes it very difficult for them to have or maintain an erection.

Factors that can cause ED include aging, cardiovascular disease, hypertension, diabetes, and obesity. Neurologic and psychological disorders can also lead to ED.

Habits such as smoking and substance abuse may be considered as contributing factors as well.

How Does Sildenafil Work?

Sildenafil is a drug that inhibits PDE5 from binding with cGMP. This prevents PDE5 from breaking down cGMP—a process that, if allowed to continue, ultimately causes flaccidness.

Sildenafil allows the blood vessels to relax, allowing more blood to flow into the penis.

Do keep in mind, however, that sildenafil will not be able to provide an erection just on its own. You still need to be sexually stimulated.

Doctors would recommend that patients take the drug an hour before sexual intercourse. Sildenafil comes in three doses: 25 mg, 50 mg, and 100 mg.

An initial dosage of 50 mg is recommended in the majority of cases, though adjustments may be made when necessary.

How Long Does Sildenafil Stay in Your System?

A study in 2002 revealed that sildenafil takes effect within 12 to 30 minutes after the initial dosage (3). The body receives the full concentration of the drug after an hour.

But, it may also take longer for the medicine to take effect in some cases.

Consuming fatty meals before taking the pill may make it hard for the body to absorb the drug. This, of course, means that you’ll also have to wait a bit longer before you can achieve an erection.

Medical researchers also conducted a study to determine sildenafil’s effect at certain intervals. These studies show that the drug stays in the system for up to 12 hours.

They found out that after an hour of taking the drug, the resulting erection can last up to 27 minutes.

The half-life of sildenafil is approximately 4 hours. This means that only half of it remains in the bloodstream after 4 hours from dosage. It may take about 20 to 24 hours for the drug to exit your system.

Doctors do not recommend taking multiple doses of the pill within 24 hours.

Given the medication’s relatively long half-life, ending up with excessively high amounts of this drug is indeed possible with multiple doses.

Side Effects and Other Safety Concerns

Some common side-effects associated with sildenafil use are:

Another side-effect that must be mentioned is visual impairment, despite it being rather uncommon. A study in 2006 pointed towards the fact that sildenafil, being a PDE5 inhibitor, tends to affect the optic nerves (5).

Patients with underlying health issues are more likely to suffer from the drug’s side-effects. Doctors recommend people with cardiovascular disease to take extra caution when taking the pill.

Patients taking vasodilators or nitrates must not take ED medication. This could cause a rapid reduction of blood pressure which could be very dangerous (6).

How Long Does Sildenafil Remain in the Body?

It has been more than 20 years since the approval of Viagra as a treatment for ED. And yet, many still prefer the little blue pill over newer drugs. That’s quite impressive, especially considering that it isn’t the cheapest option.

Despite sildenafil being among the most trusted medications, questions like “How long does sildenafil stay in your system?” are still common. Well, as you’ve learned, it could remain in the body for an entire day—but there’s nothing wrong with that as long as you don’t take multiple doses.

If you have other questions regarding the popular ED drug, let us know by leaving a comment down below.