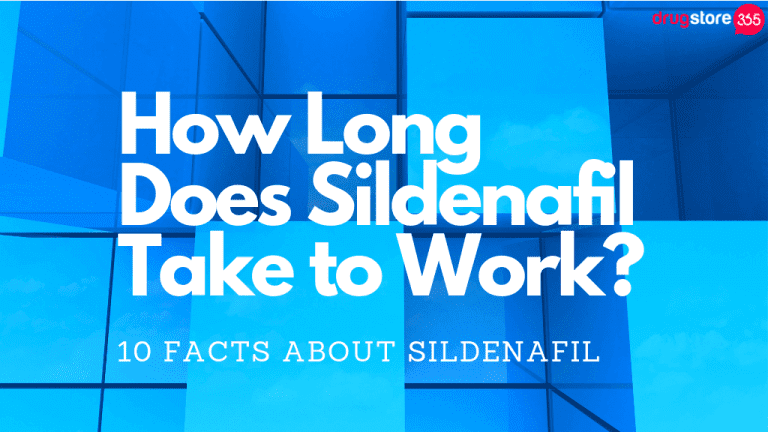 Sildenafil is a drug that helps treat erectile dysfunction. In this report, we will discuss several facts about sildenafil, as well as answer some questions, including how long does sildenafil take to work.

1. Who Are Eligible to Take Sildenafil?

Erectile dysfunction (ED) is a disease that affects a broad group of men, characterized by the inability to get or maintain erections for sexual intercourse (1).

It is associated with aging, hypertension, obesity, diabetes, heart diseases, medication, and several other factors (2).

A study by Hatzimouratidis (2) summarized from numerous other studies that sildenafil has shown to be effective for many subpopulations of men.

The drug has proven to have a positive effect regardless of age and ethnicity, and also demonstrated to work for those with diabetes, ischemic heart diseases (with medication), and hypertension (with medication).

Positive effects were also observed for people who have undergone a bilateral nerve-sparing prostatectomy, chronic dialysis for renal failure, renal transplant, and spinal cord injury, and even for patients with depression.

The use of sildenafil to treat female sexual disorders has also been explored, though it has been found to be inconclusive (3).

Disclaimer: Medications affect each person differently. This article should not be used as a substitute for medical consultation. Please talk to your health adviser before taking the drug.

Erections are achieved by a series of chemical reactions in the body.

When stimuli such as physical touch or mental fantasies reach the pelvic parasympathetic plexus, the neurotransmitter nitric oxide (NO) is released.

This promotes the production of the molecule cyclic guanosine monophosphate (cGMP), which causes smooth muscle relaxation and increased blood flow that leads to an erection.

Phosphodiesterase-5 (PDE-5) is an enzyme that breaks down cGMP. The breakdown of cGMP leads to the contraction of the smooth muscles and arteries of the penis, causing the loss of erection.

At the same time, if cGMP levels are low, this will prevent the relaxation of smooth muscle and heightened blood flow, thereby decreasing the chances of attaining an erection.

Since sildenafil has a similar chemical structure to cGMP, it acts by competitive inhibition. Instead of binding to cGMP, PDE-5 instead binds to sildenafil, preventing the breakdown of cGMP and allowing for the attainment of an erection (4).

Sildenafil has been found to work on a wide variety of patients with different conditions.

One study found that the drug was more effective for those with ED having psychogenic origins (having a psychological rather than physical roots) as compared to those who have organic (physical) causes (5).

As mentioned previously, the effect of sildenafil as a treatment for female sexual disorders have so far been found to be inconclusive, with some adverse side effects (3).

Taking sildenafil only improves erectile function. Regular doses do not cause nor intensify sexual arousal (5).

The standard dosage of sildenafil is 50 mg per tablet taken one hour before sexual activity (5). The maximum recommended dosage is 100 mg per day, though the safety of taking eight times this has been established (4).

Sildenafil should not be taken by those taking nitrates due to the possibility of a sudden drop in blood pressure (5). Examples of these are glyceryl trinitrate and isosorbide dinitrate.

It is also not advisable to take for those who have suffered from acute myocardial infarction or stroke within the last six months, and for those with unstable angina pectoris (chest pains) (7).

Some physicians also advise against taking sildenafil because of the visual disturbances that it may cause (5). This is because sildenafil also inhibits the phosphodiesterase-6 (PDE-6), the enzyme present in the retina that is responsible for phototransduction.

Phototransduction is the process in which the light is converted to electrical signals that can be processed by the brain. Inhibition of PDE-6 leads to the loss of signal that the brain can translate as sight, which leads to the reports of visual disturbances.

Effects of sildenafil intake have been recorded to last for at least 4 hours (8), with reports of effectivity for up to 12 hours (2), or even 18 hours (4). There are some reports of the effects lasting up to 24 hours, though no studies have verified this.

7. Side Effects of Intake

Due to the nature of the drug itself, some side effects may be observed when taking the medication. These side effects include the following:

Disclaimer: The list above contains only some of the side effects of sildenafil. Make sure to consult a licensed physician for any abnormal indications when under medication.

8. Other Uses of Sildenafil

Though sildenafil has proven to be useful in treating ED, other areas of research also indicate that it helps treat pulmonary artery hypertension (9). It is also a possible treatment for other conditions such as lower urinary tract symptoms and premature ejaculation.

9. What Are the Effects of Long Term Use?

One study (10) found that long term use of sildenafil led to some side effects that caused reduced dosage or discontinued use. Such side effects included headache, dyspepsia, rhinitis, flushing, abnormal vision, and dizziness. Despite this, no serious side effects were recorded to be caused by the treatment itself.

10. How Long Does Sildenafil Take to Work?

One of the common questions regarding this drug is how long does it take to work? This, of course, depends on a wide range of factors, though tests show that in most cases, it takes an average of 30 to 60 minutes for it to take effect.

Start of efficacy varies from case to case. In one study (8), efficacy was observed as early as 12 minutes after taking a dosage. Another study showed that taking sildenafil on an empty stomach allows for quicker effectivity at 19 minutes (4)

This article has discussed the basics regarding the use of the drug sildenafil, including but not limited to its mechanism of work, recommended dosage, contraindications, duration, side effects, and answered some questions including how long does sildenafil take to work?

However, please note that this article should not replace consultation with a licensed physician, especially one that knows your medical history.