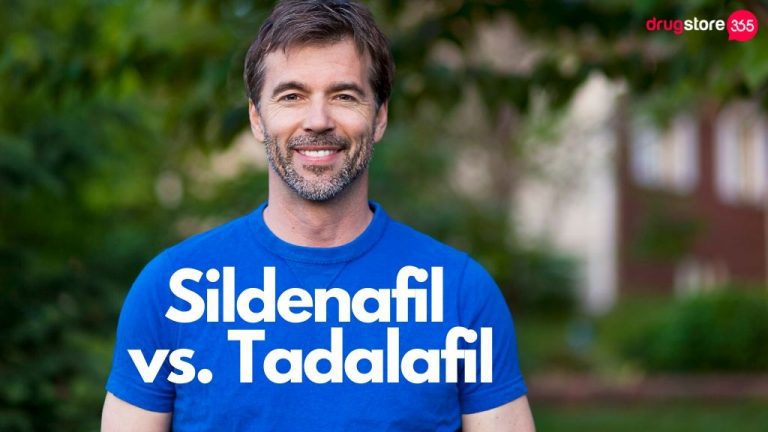 People usually love to compare products so that they could know the pros and cons of every option. And that is why some ask the old sildenafil vs. tadalafil question when it comes to treating erectile dysfunction (ED).

These drugs are the two most prevalent oral treatments for ED. Both of them belong to a class of medication known as phosphodiesterase type 5 (PDE5) inhibitors.

That is also part of the reason why both of these medications work pretty much the same way. Both of them will not cause you to have an erection.

You need to be sexually stimulated first, and then these PDE5 inhibitors will help cause the corpus cavernosum in your penis to relax (1).

The corpus cavernosum is the two tube-like muscles that run along the length of the penis. Both sildenafil and tadalafil act on the nerves to make these muscular chambers relax, thus allowing more blood to flow into them.

That means the blood is trapped within the spongy tissues of the penis, which causes the erection. Blood pressure increases in the penis, thus making it firm and hard.

And that is the desired effect that people are looking for from these two drugs.

Sildenafil was introduced to the market by Pfizer back in 1998. They branded it as Viagra, the famous blue pill. It is a well-known drug and has been proven to be effective as an oral treatment for ED (2).

It has been more than two decades since and we now know more about this drug in the way of actual medical tests. Actual clinical trials have proven its benefits as well as discovered its side effects.

For instance, we know that the onset of its effects can occur within 30 to 60 minutes after taking it. Of course, certain factors like any medications that you’re taking and your diet can affect how fast it can take effect.

We know that it can be taken on an empty stomach. However, you can take Sildenafil with a meal. It’s all up to you, but some studies suggest that if you want to get the maximum effects, then you should take it without a meal.

Remember that even though the effects can last longer than four hours, the quality of erections that one may experience may diminish as time goes by.

Taking Sildenafil may also cause specific side effects, such as the following (5):

To complete this comparison, we should look into the details of tadalafil.

Tadalafil was introduced into the market in 2003 by the company Eli Lilly. It was marketed under the brand Cialis. It was presented as an alternative treatment for erectile dysfunction.

Tadalafil is the active ingredient of Cialis. The patent that made this drug exclusive expired in 2017. Since then, other companies have marketed tadalafil under different brand names. But Cialis remained exclusive to the Eli Lilly Company.

The exclusive patent for Viagra also expired in 2018, and thus today, we can find Sildenafil generic brands. They also contain the active ingredient Sildenafil.

Of course, the generic variants of sildenafil and tadalafil are more affordable compared to their brand-name counterparts. Viagra can cost anywhere from $10 to $30 per pill depending on the size of the dose.

Cialis, on the other hand, is slightly cheaper. It costs anywhere from $5 to $20 depending on the size of the dose.

The onset of action of tadalafil is pretty much the same as the results for sildenafil. According to one medical report, tadalafil can take effect as fast as 15 minutes (6).

Clinical studies reveal that tadalafil is just as effective and as safe as sildenafil when it comes to treating ED (7). They also help improve your sexual confidence.

Again, as it was pointed out earlier, some studies show that the effects of sildenafil can last as long as 12 hours. However, that still doesn’t compare to the average duration of effectiveness for tadalafil.

Some side effects were identified, which were associated with the intake of tadalafil, which includes the following:

However, studies also show that in spite of these side effects, this drug was still well tolerated by those who took it (8). Tadalafil is safe for long term use anywhere from 18 to 24 months.

Another advantage of tadalafil is that it is safe to be taken daily. Note that there are two types of this drug, and the only one can be taken on a day to day basis.

Another related downside of this drug is the fact that the longer you take it, the longer the side effects tend to last.

Viagra or Cialis: Which One Should I Take?

There’s no clear-cut winner between these two, but it cannot be denied that a lot of consumers prefer tadalafil due to the benefits and advantages mentioned here.

However, it should also be noted that the effects of drugs may be different for you. Consult your doctor before trying any of these medications and get insights on what’s likely to be better suited for you.

Sildenafil vs. tadalafil—which are you more inclined to take? Well, if you have other questions regarding these two, don’t hesitate to let us know. Just leave a comment below, and we’ll do our best to clear things up.