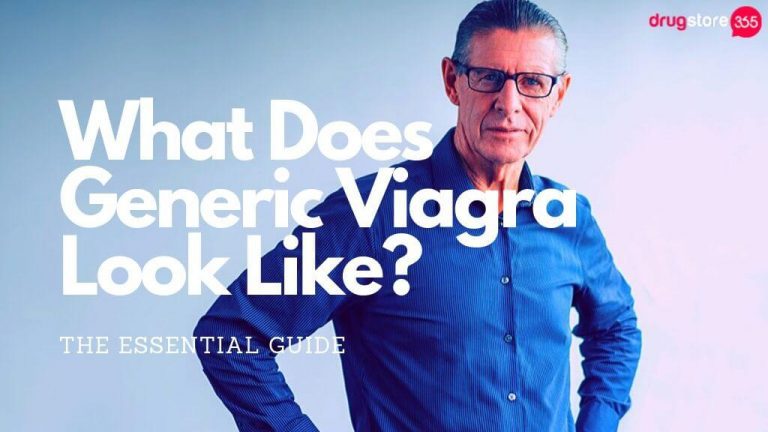 What does generic Viagra look like? That is an interesting question—but why would people want to ask that? The answer is that there is such a thing as generic Viagra.

We should know by now that Viagra is medically tested for the treatment of erectile dysfunction. Its benefits and effects have been clinically proven through a variety of clinical trials (1).

Where Does Generic Viagra Come From: Origins of Viagra

The pharmaceutical company, Pfizer, created the original Viagra pill. They initially researched this drug for hypertension. However, when they tested the drug, it ended up as a failure—it failed as a treatment for high blood pressure.

What is interesting was that they discovered that there was a “side effect” as they called it back then. Those who took the drug experienced something: they all experienced improved erections.

One nurse noticed that a lot of the patients who took part in the experiments usually lied on their beds on their stomachs when she came over to check their blood pressure. They did that to hide their erections.

Eventually, when Pfizer doctors wanted to pack things up, they also discovered that a lot of the patients didn’t want to return the blue pills that weren’t used.

After this discovery, Pfizer conducted another set of tests. These follow up medical tests were more of a sexual nature this time around.

After further testing, Pfizer applied for a patent. Soon after, they also received an FDA approval to sell the drug on March 27, 1998. They gave the drug a more marketable and friendlier name, which is the one we know today—Viagra.

The Rise of Fake Viagra

When a product becomes a hot item, especially when a lot of men come rushing to order it, you should expect that there will be unscrupulous people who will try to sell counterfeits (2).

This is perhaps one of the reasons why people ask what generic Viagra looks like. People want to be able to distinguish real Viagra from generics and counterfeits. Simply put, people want to avoid getting scammed, especially when health is involved.

You see, fast forward 20 years since the creation of Viagra, its patent license went out. The Medicine and Healthcare Products Regulatory Agency (MHRA) only grants a 15 to 20-year license for a company to produce a specific type of medication exclusively.

After the 20 years was over, and for Viagra that happened in 2018, other companies were also allowed to sell the same type of medication. The only difference is that these new players couldn’t use the same brand name—Viagra.

So, what did these new companies do? They sold it under the name of the active ingredient of the drug—sildenafil. And that is how we have generic brands being sold and marketed today.

People counterfeited Viagra back then, and they still do today. One of the causes of this is the price of this drug. Even back then, the cost of one pill alone was already staggering.

The consumer’s options include the following:

Of course, we have Pfizer still marketing Viagra as a kind of lifestyle drug (5). That is one option—a rather expensive one at that.

But if you don’t have the cash to cough up, then your best option is to find a generic Viagra that has been tested to have the same effects (or almost the same effects) as the original drug.

Here is a description of the actual Viagra pill:

Note that Pfizer secured the patent not only for the name of this drug but also for its color, shape, and appearance.

Now here is what a generic Viagra would look like:

Now, generic or not, Sildenafil or Viagra will still have possible side effects that everyone should know about. Studies show that people have high tolerability for this drug.

But it isn’t without its side effects. Some of the adverse reactions that men experience include heartburn, nasal congestion, headache, and flushing (6). Note, however, that you can continue to take Viagra even though you experience these symptoms.

It has also been observed that these side effects are more common with people who take higher doses of this drug. You should not take this drug if you are taking any medications that contain nitrates.

Nitrates are usually prescribed for chest pain as well as for pulmonary hypertension. You should also check with your doctor first before taking Viagra or even its generic forms.

Note that some people are allergic to Viagra or its generic variants. If at any time you experience nausea, chest pain, or even dizziness after taking any kind of sildenafil, then you should seek immediate medical help.

There’s nothing wrong with taking generics as long as you’re sure of their quality. And so, you must know how to distinguish a good alternative from one that’s merely made to trick the unwary.

Again, do your best to find out whether a particular sildenafil preparation functions in almost the same way Pfizer’s little blue pill. Don’t settle for something that isn’t explicitly made for erectile dysfunction.

What does generic Viagra look like? At this point, you should be capable of identifying these cheap alternatives—and more importantly, you should be able to tell if you’re using a legit variant.

If you have other questions about sildenafil or erectile dysfunction in general, don’t hesitate to let us know by leaving a comment below.