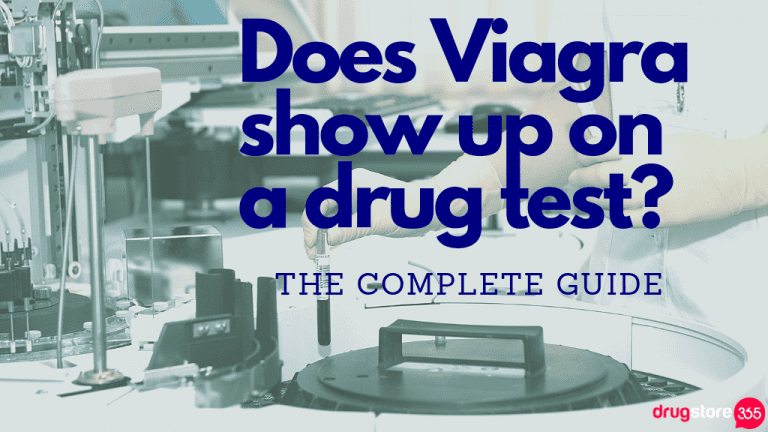 Does Viagra show up on a drug test? For anyone seriously into sports or planning to enter the military but is currently fighting erectile dysfunction (ED), it’s essential to know whether the little blue pill will cause problems.

To truly understand whether a popular medication is capable of raising a red flag during drug tests, however, you’ll have to start with the basics—and that’s where we’re going to start within this article.

How the Little Blue Pill Came to Be

The first thing to know here is that Viagra and sildenafil are mostly the same things. The former is merely a brand name created by Pfizer.

Yes, it was Pfizer that synthesized sildenafil back in 1989, and they originally intended for it to be used in managing heart problems. After some clinical trials, though, it was found that the drug barely does anything for people with those problems.

It wasn’t entirely a waste, however, as they discovered that the drug could work in battling ED. The participants in the studies conducted by the company reported improved sexual function when on the drug.

Succeeding tests then showed that, indeed, the drug is safe for use by people with ED. Pfizer then decided to market it as an oral medication for ED sufferers, and the FDA approved its use in 1998.

A Look Into Its Mechanism of Action

Following the discovery of sildenafil as a potential treatment for ED, Pfizer launched an investigation to understand how it actually works. They wanted to know what gives it the capacity to mitigate the male health dilemma.

Well, they discovered that the drug acts on an enzyme called phosphodiesterase type 5 (PDE5), which has inhibitory effects on cyclic guanosine monophosphate (cGMP) (1).

This chain of reaction increases the amount of cGMP in the penis, which ultimately causes specific penile muscles to relax. This leads to an amplification of blood flow into the penis, allowing for an erection to be achieved and maintained.

Moving on to the Topic of Drug Tests

Now that you have a basic understanding of how Viagra works, let’s talk about the matter of drug testing.

In most cases, whether it’s for the military or sports competitions, tests are carried out in a targeted manner. That means they’re going to check for specific markers and substances.

Anti-doping organizations, for example, typically look out for anabolic compounds and growth factors (2). Blood and urine samples may also be assessed for the presence of chemicals that may boost hormones and metabolism.

A similar approach is followed in finding out whether a person has been taking illegal substances. So, with this specificity in mind, is it really possible for Viagra to be detected through drug testing?

Does Viagra Show Up on a Drug Test?

The answer to that is yes.

However, for the ED medication to yield a positive, it should be among the targeted compounds in the first place. In other words, that particular test should be checking for Viagra as well.

If the test is only looking for drugs that are commonly abused such as morphine, cocaine, amphetamines or benzodiazepines, Viagra, even if it is present in your system at the time of testing, will not show in your results.

Remember that sildenafil is not a controlled substance, and it is not illegal to use it, and therefore, most tests do not include checking for its presence in the blood or urine.

As for the matter of doping in relation to athletic endeavors, you don’t have anything to worry about either.

The little blue pill’s fairly straightforward mechanism of action shouldn’t really have an effect on your hormone levels and pace of metabolism.

Understanding the Pill’s Side Effects

You’ve probably become eager to take Viagra upon realizing that it doesn’t have a negative effect on drug testing.

Instead of immediately buying and taking the ED medication, however, you should first familiarize yourself with the side effects it can cause.

Yes, mild and short-lived side effects were observed in clinical trials done in the past. The most common ones found are flushing, headache, nasal congestion, and heartburn.

In one study involving 256 patients, only 30% experienced flushing, 25% experienced headaches, 18% had nasal congestion, and 10% suffered from heartburn (3).

No one withdrew their participation, which is to be expected given the low severity of symptoms they had experienced.

Other side effects attributed to Viagra use include dyspepsia, blurring of vision, back pain, and sleep problems.

How to Know the Right Dose for You

For the sake of safety and to ensure efficacy, talk to your doctor about the exact dosage you need. He will most likely consider your body mass as well as your age. Studies suggest, however, that demographics aren’t a risk factor in taking Viagra (4).

For initial use, and assuming that you don’t have other underlying medical issues, your doctor might recommend that you take the 50 mg variant. Dose adjustments may be made based on factors such as potency and safety.

Are There Contraindications to Know?

Yes, there are. For one, Viagra has been shown to increase the hypotensive power of medications with nitric oxide. Check your meds if they contain nitrates. If they do, be sure to visit your doctor before taking even a single pill of the ED drug.

It’s also important to note that some people have hypersensitivity to sildenafil or other components of the drug.

People using guanylate cyclase (GC) stimulators such as Riociguat should likewise exercise caution in using Viagra. Since Viagra has a vasodilating effect, it can lower blood pressure, which is also the primary effect of using GC stimulators.

What about alcohol? Well, alcohol also has a hypotensive effect, and like Viagra, it lowers blood pressure. However, the combination of the two has not been shown to have dangerous consequences.

It’s only that alcohol has the effect of decreasing blood flow toward the penis and, therefore, is at odds with the positive impact of Viagra on penile erection (5).

Will Sildenafil Appear on a Drug Test?

Viagra can last up to 6 hours in your system. Still, unless you’re being tested specifically for the presence of the ED drug, you shouldn’t worry at all about raising a red flag during drug testing procedures.

Again, the medication only improves blood flow to the penis—it doesn’t affect your hormone levels and won’t raise your metabolism. It isn’t like any illegal substances either, so mistaking Viagra for such dangerous compounds is unlikely.

Does Viagra show up on a drug test?

Now that you know the answer, you might feel the urge to learn about the medication’s other facets. Feel free to post your thoughts and comments below, and we’ll help you find the info you need.