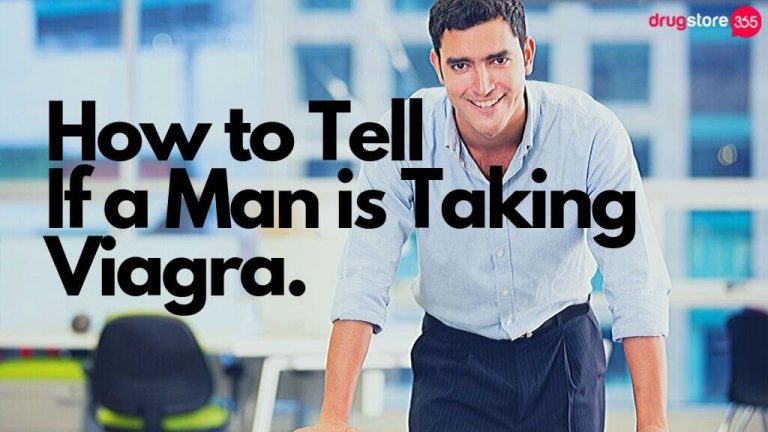 Before anything else, yes, you can learn how to tell if a man is taking Viagra—and it’s actually foolproof.

Mild to moderate erectile dysfunction affects up to 52% of men in the 40- to 70-year-old range (1). It negatively affects a man’s relationship with himself, his relationship with others, his everyday mood, and his life in general.

Now, you may have a lot of questions in mind. How do you know if a man is taking Viagra? Can it cause an increase in sexual arousal? Why do men use it? Are there any risks?

If these are questions you want to be answered, then you’ve come to the right place. Here we’ll discuss what Viagra is, its telltale effects, and why it’s used.

Viagra is Pfizer’s brand name for sildenafil citrate. It’s a very popular drug known to treat erectile dysfunction (2). Viagra has been so successful in this area that some experts even think it can be taken to prevent the male health dilemma’s onset (3).

A man takes Viagra to deal with erectile dysfunction, and this should not be a negative thing on its own. Men from different age groups suffer from it. As much as 7% of men aged 18 to 29 find it difficult to achieve and maintain an erection, and the prevalence increases with age (4).

Viagra can be taken by a sexually active man from 18 years of age, though risks may increase if it were to be taken by older individuals. The risk does not come from the drug itself though but from the combination with other drugs, and the medical history of the patient.

Where Can You Get Viagra?

Viagra is a prescription drug, which means you need a physician’s approval before you can get it. It’s dangerous to take Viagra without checking up with a physician if it’s safe, especially for older men with a history and risks of heart disease (5).

Some online sources are not very strict though (6). Despite the contraindications being public knowledge, some online pharmacies sell Viagra and sildenafil citrate without as much as a prescription.

Drugs for erectile dysfunction are being marketed online as wonder drugs or miracle drugs. You can sometimes even order the drug after acquiring a prescription from an alleged, in-house physician—and even after you’ve known a history of contraindications.

How to Tell if a Man is Taking Viagra

If you want to know if someone is taking Viagra, simply follow these steps:

A man takes Viagra with the expectation of having sex within 30 to 60 minutes, and the drug helps him maintain an erection. The fact that he’s anticipating sexual activity is what makes him aroused, and that results in being more sexually active.

Without sexual arousal or stimulation, Viagra does nothing to the body except increase the blood flow to the penis, which is its intended effect.

If he’s easily capable of getting another erection after having sex, that’s another telltale sign. The length of time Viagra will last is not the same for all men though. Some can maintain their erections for over 30 minutes at once (8).

Step 2: Find out if he’s stopped taking his meds

If he’s stopped taking his meds or some of it due to some reason you’re not aware of, chances are that he’s taking something else that can make a deadly combination.

Nitrates, for example, should not be taken with sildenafil because this combination can lead to excessively low blood pressure (9). Some drugs like dexamethasone and rifampin may reduce Viagra’s overall potency (10).

Step 3: Notice if he’s saying no to alcohol more often

Physiologically, alcohol will make it more difficult to have sex. Psychologically, however, it lowers inhibitions resulting in an increase in sexual desire.

You can blame alcohol for making a man more sexually aggressive, but those who take Viagra would say no to alcohol more often.

Step 4: If you’re not convinced, just go ahead and ask

If, after all these, you still can’t tell for sure, the last resort is to ask. Although, on second thought, you could’ve just had this as your first step and saved yourself all the trouble.

There are three telltale signs that a man is taking Viagra or sildenafil: he’s being more sexually active, he’s stopped taking medicines that could make a deadly or reduced effect when combined with Viagra, and/or he’s stopped drinking alcohol.

Find Out if He’s Taking Viagra

The psychological, mental, and physical effects of erectile dysfunction can be devastating for men, especially for those who are in the 18- to 40-year-old range, when their partners expect them to be more sexually potent.

If you wish to find out whether a man is taking Viagra, it should be with the intent of helping him to treat his condition and make him feel better. Erectile dysfunction is a common condition, but the stigma around taking Viagra makes it harder for men to seek treatment.

At this point, you should already know how to tell if a man is taking Viagra. Do you think your man is taking the little blue pill? If he is, how did you feel when you found out—let us know in the comments!