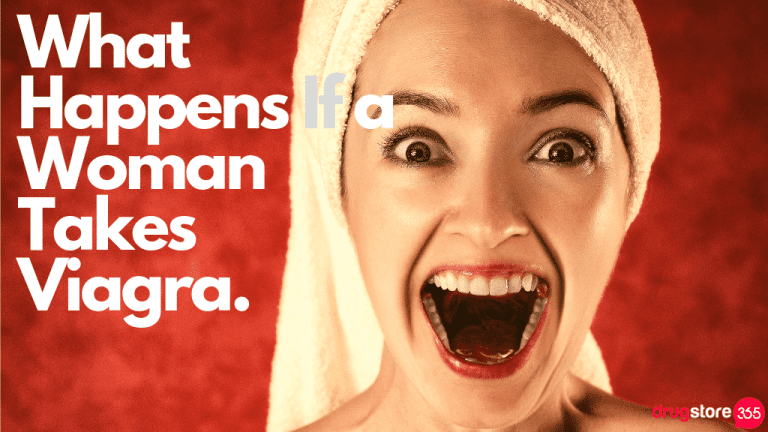 Viagra is the brand name of sildenafil, an oral medication used to treat erectile dysfunction (ED). It increases blood flow to the penis so that erection can be achieved upon getting sexual stimulation.

Many seem curious, however, about what happens if a woman takes Viagra. In this article, we’re going to tackle that topic—and hopefully, we’ll uncover something useful to women facing problems with sexual health.

Effects on the Male and Female Genitalia

Viagra’s effects differ among men and women. When a man gets aroused, nitric oxide (NO) is released by his body. This goes to the erectile tissue, causing cyclic guanosine monophosphate (cGMP) to be produced.

The arteries in his penis dilate, and in turn, his smooth muscle cells relax. His erectile tissue fills with blood, and the blood flows to his penis increases, causing an erection (1).

Viagra has been proven to aid men with varying degrees of ED. It helps them achieve and maintain an erection long enough for sex. It generally starts to work within thirty to sixty minutes.

In one study, it was found that 72%, 80%, and 82% of participants who took 25 milligrams, 50 milligrams, and 100 milligrams of Viagra, respectively, were able to achieve erections.

Because of the similarities between the sexual response among men and women, studies have been conducted to assess the effects of Viagra on female genitalia.

Although female sexual dysfunction (FSD) is not exactly an illness, it can still cause lots of distress. Its symptoms include low sex drive, pain during sex, and orgasm issues (2).

It’s something that can be triggered by aging, illness, stress, and significant life changes, such as pregnancy.

What Happens If a Woman Takes Viagra?

It’s believed that Viagra can also increase blood flow towards the female genitalia, potentially aiding orgasm and increasing lubrication. Despite this, it has not been found to improve sexual response in most women (3).

In 2003, a study was done at the Urology Department of the University of California, Los Angeles (UCLA) to learn about Viagra’s effects on postmenopausal women with female sexual arousal disorder (FSAD).

It was found that the pill helped the participants improve their satisfaction and genital sensation during stimulation and intercourse. Then again, side effects were observed, such as headache, nausea, flushing, and rhinitis.

Similar studies were conducted to understand the effects of Viagra on women in general, but they did not show any significant positive response. Sildenafil did not have any impact on this pre- and postmenopausal women.

Should You Take Viagra If You’re a Woman?

In 2015, the United States Food and Drug Administration (USFDA) stated that it had not approved Viagra for women—likely to prevent experimentation among the female population.

Thus, if you’re a woman suffering from FSD or any other sexual problems, you should go to your doctor for proper treatment. Refrain from taking matters into your own hands to avoid complications.

It balances the brain’s chemicals to increase sexual desire. It also reduces feelings of inhibition and encourages sexual excitement. It’s commonly referred to as the female Viagra, women’s Viagra, and pink Viagra.

The USFDA has approved Addyi as a treatment for HSDD or FSIAD in pre-menopausal women. According to statistics, this disorder affects 10% of adult women.

It is characterized by symptoms, such as absent or limited sexual thoughts, the absent or reduced response of desire towards sexual stimulation, lack of interest in sexual activities, and feelings of incompetence, worry, or frustration at the lack of sexual arousal.

In the past decade, however, the FDA has actually declined its approval twice. Boehringer Ingelheim was the initial producer. In 2011, it transferred the rights of the drug to Sprout Pharmaceuticals. Recently, these rights have been moved again to Valeant Pharmaceuticals (5).

At present, flibanserin has been made available to the public. However, it can only be prescribed by those certified by the manufacturer and have met specific requirements of the USFDA.

Dosing, Safety, and Other Considerations

You can get flibanserin in 100-milligram tablets. It’s recommended to be taken once a day before bedtime.

Taking it at this time minimizes side effects, such as syncope, drowsiness, and hypotension. Also, taking it with food slows down its rate of absorption yet increases its extent of absorption.

According to clinical trials, flibanserin may interact with a potent CYP3A4 inhibitor, such as ketoconazole, as well as alcohol and grapefruit juice. This can result in syncope and hypotension (6).

If you’re on any medication, see to it that you consult your doctor before using flibanserin. In general, this drug should be avoided if you are also using medicines for heart conditions, such as verapamil and diltiazem.

Likewise, it isn’t recommended if you are on antibiotics, such as erythromycin and ciprofloxacin, or fungal infection medications, such as itraconazole and fluconazole.

Furthermore, you should avoid using it if you have liver problems or you are using the antidepressant nefazodone. This depression medication can prevent flibanserin from being used up by the body fast enough, increasing the likelihood of side effects occurring.

It is also not to be taken with supplements such as ginkgo, resveratrol, and St. John’s Wort. You should also refrain from taking it with the previously mentioned beverages.

Just How Effective Is the Female Viagra?

The USFDA approves drugs after undergoing clinical trials that last for several weeks each. In the case of flibanserin, it was only approved after going through three different clinical trials.

The results were compared to those of the placebo as well as analyzed by the USFDA and other investigators. They have found that 10% of participants had a “much improved” status throughout the trials.

Still, flibanserin was found to be moderately beneficial to patients with sex drive problems. Its long-term safety is still poorly defined though, as there’s a lack of reliable scientific data on this matter (7).

While Addyi helps boost libido in women, you have to realize psychological and physical factors that cause those sex drive problems. In most cases, they even intertwine—making treatment much more challenging.

Such psychological factors are actually more complex than the physical ones. Thus, customized treatment options should be given to patients to suit their specific needs.

For example, stress, depression, and anxiety can result in sexual dysfunction, especially among postmenopausal women. During menopause, women go through a wide range of social, psychological, and biological changes.

They tend to be more sensitive towards psychological pressures, particularly depression and anxiety. They experience a deep sense of loss, such as the loss of youth, beauty, and motherhood (8).

High levels of chronic stress were also found to be connected to lower levels of sexual arousal. Regular exposure to small, chronic stressors accumulate and contribute to problems with sexual function (9).

So, a patient who suffers from stress or relationship problems may be referred to a couple’s counselor. Since various factors tend to affect desire, it’s crucial for healthcare providers to create treatment plans that address all possible contributors (10).

What’s the Result of Taking Viagra and Addyi?

Viagra and Addyi work differently. The former targets a physical sort of sexual dysfunction, while the latter targets the psychological aspect.

Sildenafil hinders enzymatic activity to ensure efficient blood flow in the penile region. Flibanserin, on the other hand, works by raising the levels of norepinephrine and dopamine, which in turn promotes arousal and desire.

Men and women who suffer from sexual dysfunction should not merely focus on a single aspect. They have to assess themselves and figure out what makes them lose interest in sexual activities, or what prevents them from engaging in intercourse.

They have to reflect on the possible reasons why they have a low sex drive or why they cannot perform well in the bedroom. Remember that sex is more than just a physical pursuit.

This article has thoroughly discussed the sensitive topic of sexual dysfunction as well as given you insights on what could happen if a woman were to take the little blue pill.

Viagra is not ideal to be used by women since it is specially designed for men. Ladies suffering from sexual dysfunction, particularly issues with their libido, may use flibanserin.

What happens if a woman takes Viagra? In short, nothing much—improvements in desire are limited if not non-existent, and mainly manifests among those already in the postmenopausal stage.

If you have other questions about FSD or FSAD, however, do let us know through the comments section below.