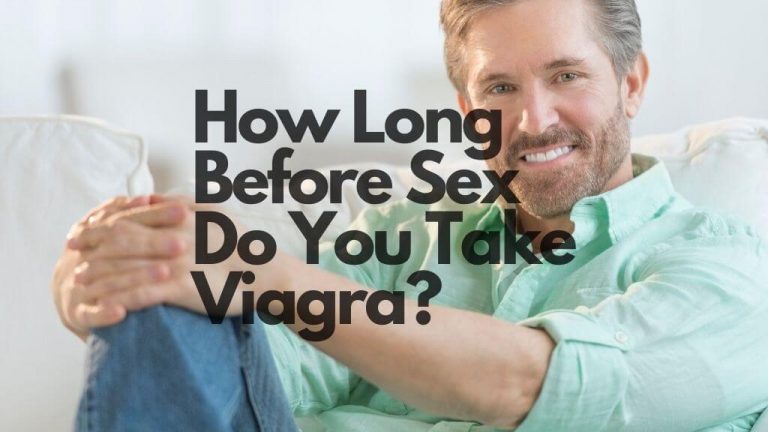 How long before sex do you take Viagra? Sildenafil citrate, commonly known as Viagra, is proven to be a very effective solution for erectile dysfunction (ED) (1). However, it does rely on timing to work its best.

Besides, it’s a relatively expensive pill and cannot be taken more than once daily. So to make the most out of it, you have to know when to take the little blue pill as well as be aware of how long its effect lasts.

How Long Before Sex Do You Take Viagra?

Viagra is manufactured by Pfizer, a well-known pharmaceutical company. According to them, the ED drug can be taken up to 4 hours before sexual activity.

The pill starts to work within 30 to 60 minutes upon intake. The effects should start to wear off 3 to 5 hours after taking the pill. Although, of course, the extent of effects tends to vary per person.

Pfizer may have been too modest on the efficacy of Viagra with what they have written on their website. Actual records clearly show better performance for the drug.

Clinical studies reveal that sildenafil citrate can produce a penetrative erection in as early as 12 minutes for some individuals—particularly those who are mostly of good health.

The ED drug’s efficacy tends to last, at the very least, for 4 hours (2). But according to one particular study, the duration of action can be as long as 12 hours (3).

This means that in order to maximize the time Viagra takes effect in the body, it’s best taken 30 minutes before sex. From this point on, the duration of action should last several hours.

Not all individuals using Viagra will get the maximum effect, even when taken at the right time and with the right dosage.

Older individuals have a slower metabolism, thus it takes longer for their body to break down the components of the drug and flush it out of the system.

This also means that generally, the effects of Viagra last longer in older men, 65 years old and above. Unfortunately, they also have to wait a bit longer to feel its erection-enhancing perks.

Eating a large meal, especially one loaded with fat, will keep the drug from being metabolized by the body too quickly. Likewise, this means that the effects will last longer, despite their onset being slower.

Alcohol consumption before sex can make the little blue pill less effective. Liquor, after all, decreases blood flow to the penis. It acts as a depressant, too, meaning it actually hinders sexual stimulation.

Certain antibiotic medications such as erythromycin, ciprofloxacin, and clarithromycin can have an effect on Viagra’s duration of action and required dosage (4).

When taking other types of medication, especially for a chronic condition, it’s crucial to seek advice from a physician. Otherwise, there’s a greater risk of suffering from preventable side effects.

A person’s psychological or emotional state during intimacy can also be a factor in whether or not Viagra will work. And yes, not being into it can sometimes be enough to prevent a full erection.

If a person is feeling anxious, nervous, and uncomfortable in any way, then the body’s responsiveness towards sexual stimuli may be severely limited as well.

Overall health is a factor when measuring how fast the little blue pill will work and how long it will last. Conditions of the nervous system, diabetes, and kidney problems can have a significant effect on the drug’s efficacy.

Also, note that ED may be a combination of psychological, organic, or relational factors. For healthy men suffering from this, there is a high possibility of it being linked to cardiovascular diseases (5).

More on Efficacy and Dosage

The benefits of Viagra have been clinically proven (6). Not only has it improved treatment for the majority of ED cases, but it has also indirectly helped enhance the management of male infertility.

The ED drug, however, is not always a hundred percent effective, especially at initial intake. It may take several tries and dosage adjustments to get the optimum benefit of Viagra, especially for those with health issues.

The average dosage for most men is 50 mg. But, there are some cases in which the drug does not take effect at this dosage, and another consultation for a possible increase in dose would be necessary.

Optimizing the effect of Viagra can also be attributed to the involvement of the partner. And no, we’re not merely talking about exerting effort to provide sufficient and sustained sexual stimulation.

It really helps if the partner is present during the patient’s discussions with the physician about proper dosage, time of intake, and precautions. Keeping track of these things becomes easier when done as a joint effort.

If the physician is able to maintain an open atmosphere during consultations, questions may be asked to further assess how to maximize the drug’s effects for the couple (7).

The Right Time to Take the Little Blue Pill

According to studies and even firsthand accounts, Viagra usually begins to work in just 30 minutes after intake. The effects should last for a good 4 hours at the very least.

Just to be perfectly clear, however, that doesn’t mean you’ll have an erection for several hours. You will simply find it easier to achieve and maintain an erection while the ED drug remains active in your system.

Keep in mind that the ED drug’s efficacy gradually drops, especially after the 3-hour mark. So, it’s important that you carefully plan the timing of your intake to enjoy the pill’s full benefits.

Still, this isn’t a strict science, so there’s no need to rush and be anxious. Once you’ve taken the medication a few times, you should become sufficiently familiar with how well it works for you.

How long before sex do you take Viagra? Although you now know the answer to that, it likely isn’t the only question in your mind. Tell us your other queries about Viagra through the comments section below.